Welcome to Sabah for the month of May, Malaysian Food Fest!


It's the month of May, and it is an honour to be given this opportunity for me to host for Sabah's food! On a side note, MFF Kelantan have ended, do visit Getrude of My Kitchen Snippets for the round up!

SABAH has well known as the  Land Below The Wind  and also Land Of The Sacred Mountain, and that is the  tallest peak in South East Asia, Mount Kinabalu. Sabah is a land of varied landscapes and natural wonders A giant napoleon wrasse
Being surrounded by 2 seas, the Sulu sea and South China Sea, Sabah is very well known for its seafood. Ask around what is Sabah famous for and the first answer could be SEAFOOD! The pristine clear waters are abundant with beautiful sea life and fishes. Most people who have lived in Sabah for a long time, will find Peninsula's fishes to be way more expensive and quality as not good. The quality of seawater does indeed play a role. The fishing industry in Sabah is big with 20000 fishermen and 8500 fishing boats. The industry has produced fish not only enough for local consumption, but has surplus to be exported. One of the most saught after fish is the Napoleon Wrasse (蘇眉鱼) . It is endangered and overfished from these waters. This fish calls for a high price and therefore makes it highly sought after in the export market. It has been banned for export since 2008. (Reference: NHP borneo and The Star )
Besides seafood, Sabah's fishermen has an alternative to livelihood, that is, seaweed farming. Located in the islands off Semporna where the sea is suitable for these sea bird's nest to flourish. Sea bird's nest is another locally known name for the seaweed because of it's collagen rich qualities. Currently it is widely popular as a consumable beauty regimen. It is also from this seaweed that the popular dessert agar-agar is derived from.


Sabah's population is heterogeneous and culturally diverse, with more than  30 different ethnic races and over 80 local dialects spoken.  All these ethnic groups live together harmoniously while at the same time preserving their own culture, traditions, festivals and customs to make Sabah a multicultural exotic experience unlike any other that you might have already experienced.
When it comes  to food, Sabah also has a special collection of mouth-watering traditional cuisine. With its diverse ethnic population, each of this group offers their own distinct Sabah traditional food. You must not miss trying out Sabah's traditional food when you are here.


The Kadazandusun people of Sabah which forms the majority of the state has a variety of traditional Sabah food type for visitors to sample and be delighted with. Here are some traditional dishes and localized dishes that are easy to make!
Kadazandusun food


Hinava is made of fresh raw tenggiri (mackerel fish), which is 'cooked' with lime juice. Hinava has a tangy and sweet taste that is perfect as appetizers. It seems similar with Sarawak Umai, but the taste is not the same.
Bambangan is a wild mango found in Borneo,that has a distinct and sharp smell but is normally harvested raw to be pickled using salt mixed with grated Bambangan seed and slices of chilli.

Left: Butod (My Sabah), Right: Pinasakan (by Emelda)
Butod is the worm from the sago plant. Can be eaten raw or deep fried

Left: Manuk Lihing, Right: Tuhau (by Jacq)
Lihing (Kadazan-Penampang for rice wine) is made from glutinous rice (pulut) and natural yeast, called ‘sasad’. Manuk Lihing is chicken soup made with sweet rice wine.  Sometimes, lihing is referred to as hiing (certain Dusun languages), and others call it kinomol, segantang, kinarung, kinopi, linahas, and even tapai. They are all different (but always fermented, rice-based) beverages.


Tuhau is a Kadazandusun side dish that is a combination of strong tasting ingredients with the tuhau ginger as the main ingredient. Not something that can be found in the west.
Bajau dishes


The Bajau people, which makes up the second largest group in Sabah has a no less impressive selection of delicious Sabah cuisine for you to try out.
As a traditional seafaring people, their cuisine also reflects their lifestyle with its variety of traditional seafood dishes on offer. The dish is made from boiled stingray meat mixed with crushed turmeric, and drenched with stingray liver oil.


Pinjaram, penyaram or kuih UFO as some would call it, is a deep fried kuih that has a nice, chewy texture with a tantalizing pandan aroma.
Kuih Cincin is a sweet biscuit that is fried twice.  Apparently this kuih can hardly be found in West Malaysia.
Those who have the recipe, you're most welcome to share with us here!


Another dish that needs to be mentioned is Ambuyat. 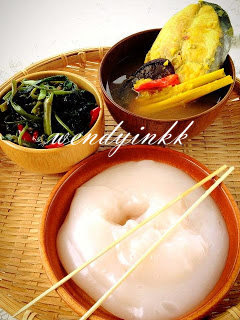 Ambuyat
The rest of the ethnic groups in Sabah also have their share of the best Sabah traditional food.


The Murut community is famous for its jaruk dish. This food is made of out of a mixture of fresh boar or river fish meat, rice and salt stuffed inside a bamboo tube and then fermented for several weeks before it is ready to serve.


The Bisaya community in Sabah has this unique dish called ambuyat, a jelly-like starchy blob made from sago powder, which is usually eaten with other dishes. Despite its bland taste, you’d be surprised to see how this versatile Sabah cuisine is when you combine it with other dishes. 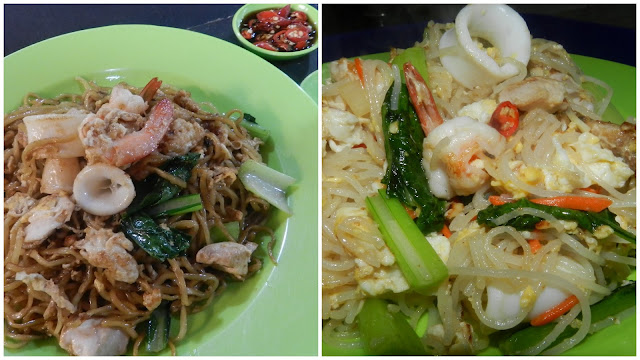 
The migration of the Chinese have also brought along noodles dishes  to the state. The most famous noodle is Tuaran Mee and Beaufort Noodle. Tuaran Noodle is from Tuaran and Beaufort noodle is from Beaufort. Both are noodles are stir fried and is very famous among the locals


DURING THE MONTH OF MAY, I WILL BE POSTING 6-8 RECIPES OF SABAH DELICACIES IN MY BLOG! STAY TUNED AND
have fun trying out these dishes! 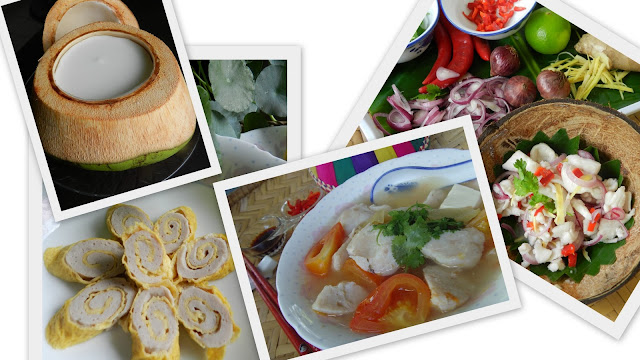 Some recipes for you to try


Savoury
1. Hinava (by A Daily Obsession), raw fish cook with line. I am also going to make this, check out my version too)

*Google Translate can help translate the recipes to English


And this month, we will be accepting recipes made from coral seaweed. Try and make something with this sea bird's nest. There are no fixed recipes as every household will have it's own way of eating it.


If you have eaten anything from Sabah and so far you find it not found it anywhere else (not that you know of, or you can check with the organizer and the host), do try and replicate it and share with us. Not all recipes are found on the internet, sadly.
Websites with Sabah Food Recipes, do check them out too


1. Who can join? Anyone can join.
2. Prepare a dish ( sweet or savoury ) that is from Sabah, be it old time favourites, modern goodies or dishes that has been localized. Take a picture of the food or many pictures.
3. Provide recipe that is credited ( from books, internet, friends or family or your own, be specific).
Submissions without stating recipe sources will not be accepted for all forms of submission.
4.Submit your entry latest by 31 May 2013 except for Facebook submissions.
TO SUBMIT


a. Prepare a dish ( sweet or savoury ) that is from Sabah
b. Blog about it from 1st May - 31st May 2013
c. Include this caption below your blog post
" I am submitting this post to Malaysian Food Fest (Link to MFF Page), Sabah Month hosted by Mary of Pepper's Love (Link to my Sabah Intro Post)"


Send the following information to this email address ( peppers_love@yahoo.com ) with the email subject as "MFF SABAH"
Name/Nickname :


a. Like this Facebook Page
b. Prepare a dish ( sweet or savoury ) from Sabah
c. Take a picture and upload it into Facebook on Sabah Food Fest facebook page here
d. Provide recipe with picture.
Bloggers can submit old recipes to Facebook. Anyone that has once cooked a Sabah dish and have a picture and recipe can submit to Facebook. Not necessarily a recently done dish.


Email a picture of the dish together with the recipe to (peppers_love@yahoo.com) latest by 31st May, 2013 by 11.59pm ( Malaysian time )
A Round Up will be done for all blog entries and emailed in entries on 1st June 2013.
Facebook entries are not included in the round up. 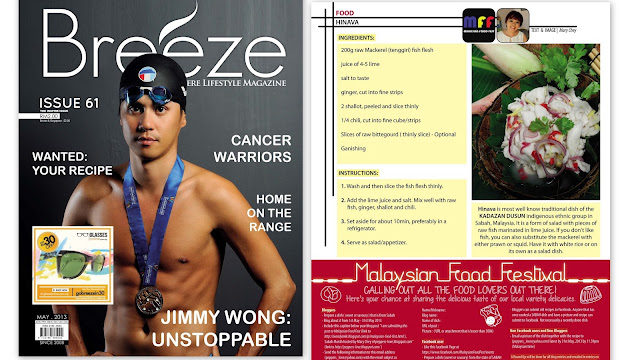 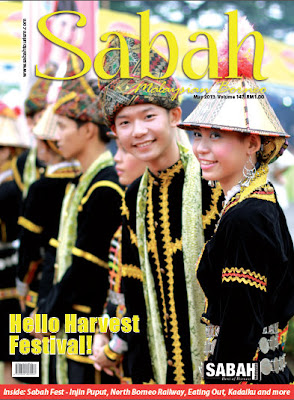 Let's celebrate Harvest Festival, Tadau Kaamatan together in the month of May! 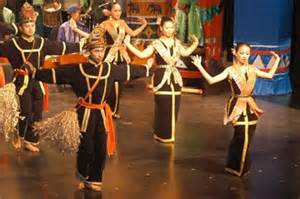 KOTOBIAN TADAU TAGAZO DO KAAMATAN
Posted by Mary Chey at 9:00 AM